It’s commonly understood that the best way to explore a new place is to go straight to the locals. Each week in the Urbanist, we take that wisdom one step further by seeking out not just locals but local experts — those who are especially well versed in their cities’ newest and most noteworthy scenes — to give us insider recommendations. This week, we asked director and entrepreneur Brandon Thaxton, owner of Acting Up and 2 Reel Virtual Studios, for his picks in Georgia’s capital city.

“There’s no city like Atlanta. The mixture of cultures, embracing of food, partying, festivals — there’s just so much to do. I love to drive from the south side of Atlanta, where you see the footprints of OutKast, Ludacris, Killer Mike, into the city, where you can see Coca-Cola, CNN, the Georgia Aquarium — these are all symbols of Atlanta. It’s also a very embracing city, and the people will embrace you not only with their arms but also with food and culture. Make sure you visit all the neighborhoods, like Little Five Points, which is a melting pot for the creatives with some of the best indie stores and niche shopping. Go visit the Atlanta Botanical Garden and the High Museum of Art and check out some shows at the historic Fox Theatre, Alliance Theatre, or 7 Stages.” “My favorite hotel in Atlanta is the Westin Peachtree Plaza (210 Peachtree St. NW; 404-659-1400). The rooms are nice and modern, but the hotel’s coolest feature is the rotating restaurant up top called the Sun Dial. The menu of contemporary American twists on Atlanta cuisine (Coca-Cola smoked brisket, butter-poached lobster ‘bake,’ fried apple pie) is so good when you’re spinning around the top of the city. It’s one of the tallest buildings in the city, 73 floors. By the time you finish eating, you would have at least made one revolution around the restaurant. The Georgian Terrace (659 Peachtree St. NE; 404-897-1991) is another great hotel. It’s across the street from the Fox Theatre. It’s a luxury hotel that feels boutique. A lot of stars and important people stay there. It’s not modern at all. The design is more old-fashioned but very elegant 20th-century Beaux-Arts with gold tones. Think royalty.” 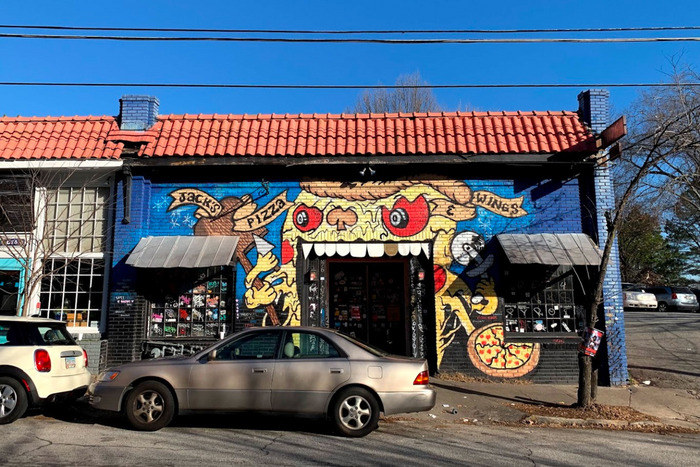 “The Virginia-Highland and Buckhead are great neighborhoods. The Highlands is a community of artists who have families. It’s full of small grocery stores and mom-and-pop shops. It’s a nice neighborhood to go to a cool bar and have a cool beer. My favorite pizza place and bar in the Highlands is Jack’s Pizza & Wings (676 Highland Ave. NE). They have a soul-food pizza with fried chicken, mashed potatoes, collard greens, and gravy. It’s delicious. You’ll see everyone at Jack’s. They’ll have open-mic and bingo nights as well as music and other entertainment. Highland Tap (1026 N. Highland Ave.; 404-875-3673) and Neighbor’s Pub (752 N. Highland Ave.; 404-872-5440) are also super-dope neighborhood bars. Buckhead is the home of the ‘bad and boujee’ of Atlanta. All the famous rappers and all the Love & Hip Hop: Atlanta stars live there. Phipps Plaza is there, which is the only place in Atlanta that has luxury brands’ stores. It also has a nice nightlife scene and great brunch. Hole in the Wall (3177 Peachtree Rd.; 404-233-9801) is a fun, youthful college-town bar. Peters Street is where the Love & Hip Hop stars go. We have 255 Tapas Lounge (255 Peters St.; 404-522-2612), which is great for brunch and nightlife, and the seafood restaurant Pearl Restaurant & Lounge (253 Peters St.; 404-524-9353), which has great $5 specials and crab legs. And you better come to brunch looking fresh: sundresses, big beautiful glasses.”

“Wish (447 Moreland Ave.; 404-880-0402) in Little Five Points is a hole-in-the-wall boutique-sneaker shop. It looks like you’re walking into a library, but it’s actually a sneaker shop. They carry a lot of rare sneakers, and a lot of the shoes are wrapped in plastic. Wish is actually the only place where I buy my Fila because the ones I like are so rare. You’ll catch very sophisticated people walk in, businessmen, and all sorts of sneakerheads: college students, rappers, artists, different performers. Little Five Points has all the best consignment and thrift shops in town.” 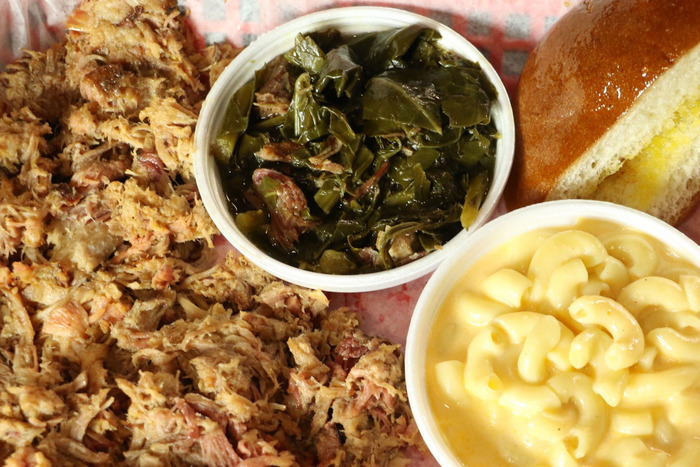 “Hot wings are huge in Atlanta. The chicken here is off the train. The best hot-wings spot is Mojo’s Motown Eatery (880 MLK Jr. Dr. SW; 404-331-3082) in the West End area. Oh my God, those wings are so solid. Mojo’s isn’t the best-looking place, but they are the best-tasting place. And it’s clean. I get a 10-piece ATL-style hot wings. You have to have them ATL style, which has lemon pepper. Barbecue is a big deal here. There’s a place in East Point called Pit Boss BBQ (856 Virginia Ave., Hapeville; 404-768-0036) that’s really good. Get the ribs, macaroni and cheese, greens. Sweet potatoes, for sure. Sweet baby Jesus, the sweet potatoes.” 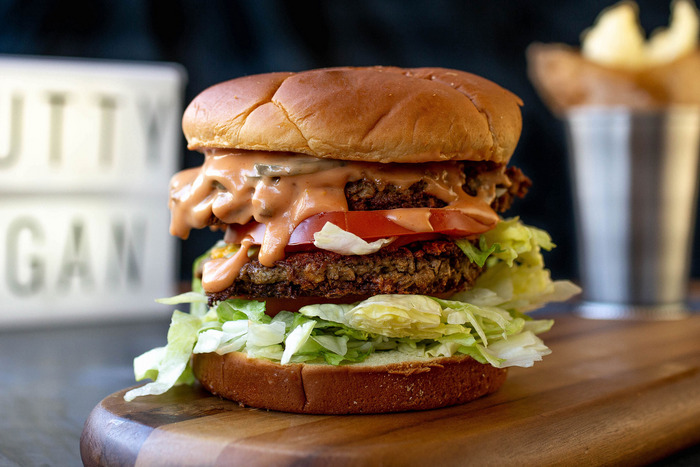 A night at Bonfire. Photo: Courtesy of Bonfire.

A night at Bonfire. Photo: Courtesy of Bonfire.

“Everybody goes out to Bonfire (880 Woodrow St.; 404-669-6948). It’s a warehouse where they, of course, light a fire and have live performances and different vendors. It happens every Sunday. They have different types of food trucks, performers, skateboarders. All ages go. It’s been going on for years. Everybody has a lot of respect for Bonfire. D. Woods, Musiq Soulchild, and Kap G have all gone. Another place is 2 Chainz’s restaurant, Escobar (327 Peters St.; 404-941-7907). The DJ spins behind half of a Mercedes. It’s another thing that’s ‘bad and boujee,’ where you have chandeliers hanging but it’s kind of hood. That pops off Fridays and Saturdays and sometimes during the week. Another great area for nightlife is Edgewood. There’s so many bars over there: Mother, Church, the Sound Table. On the weekends, they shut down the street and people just walk up and down the street going to the different bars.” 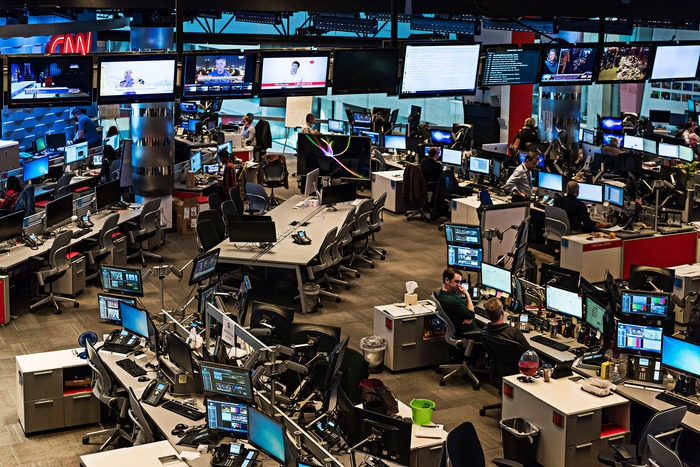 “You haven’t been to Atlanta if you haven’t paid your respects to Martin Luther King at the King Center (449 Auburn Ave.; 404-526-8900). His body is actually there. Go to that man’s house. Go to the museum. Learn everything that you can learn about Atlanta and the challenges that everyone has been through. CNN (1 CNN Center) is definitely a go-to. You can do a studio tour and see the history of CNN and how it formed. Right around the corner is the World of Coca-Cola (121 Baker St.; 404-676-5151). It’s cool — don’t get me wrong — but I wouldn’t go to it twice. You get to try every Coke in the world, and that’s probably the most amazing thing to do there. Otherwise, it’s pretty boring. ” 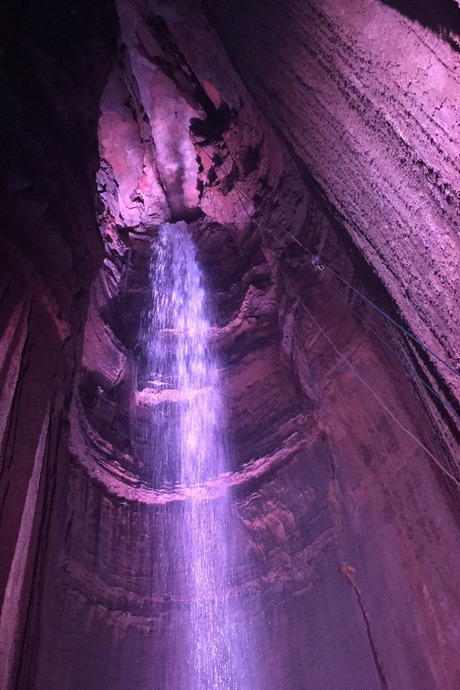 “Ruby Falls (1720 South Scenic Hwy., Chattanooga, Tennessee) is a fun place to go. It’s an hour and a half drive. Ruby Falls is definitely a tourist attraction — it’s one of the tallest and deepest underground waterfalls you can see in the United States — but it’s beautiful. There are a few different tours you can do, but they all start with an elevator ride down into the Lookout Mountain caves. Then you’re able to hike to the falls. You’ll see rock formations and all these stalactites hanging from the ceiling. It almost feels like you’re at Universal Studios.”

Expert-approved recommendations on where to eat, drink, shop, sightsee, and stay in destinations around the world.

What Are the Best Jeans…

The “To All The Boys…

Bong Joon-Ho Apologising To The…

24 Moments From The Oscars…

The Oscars Diversity Problem Was…